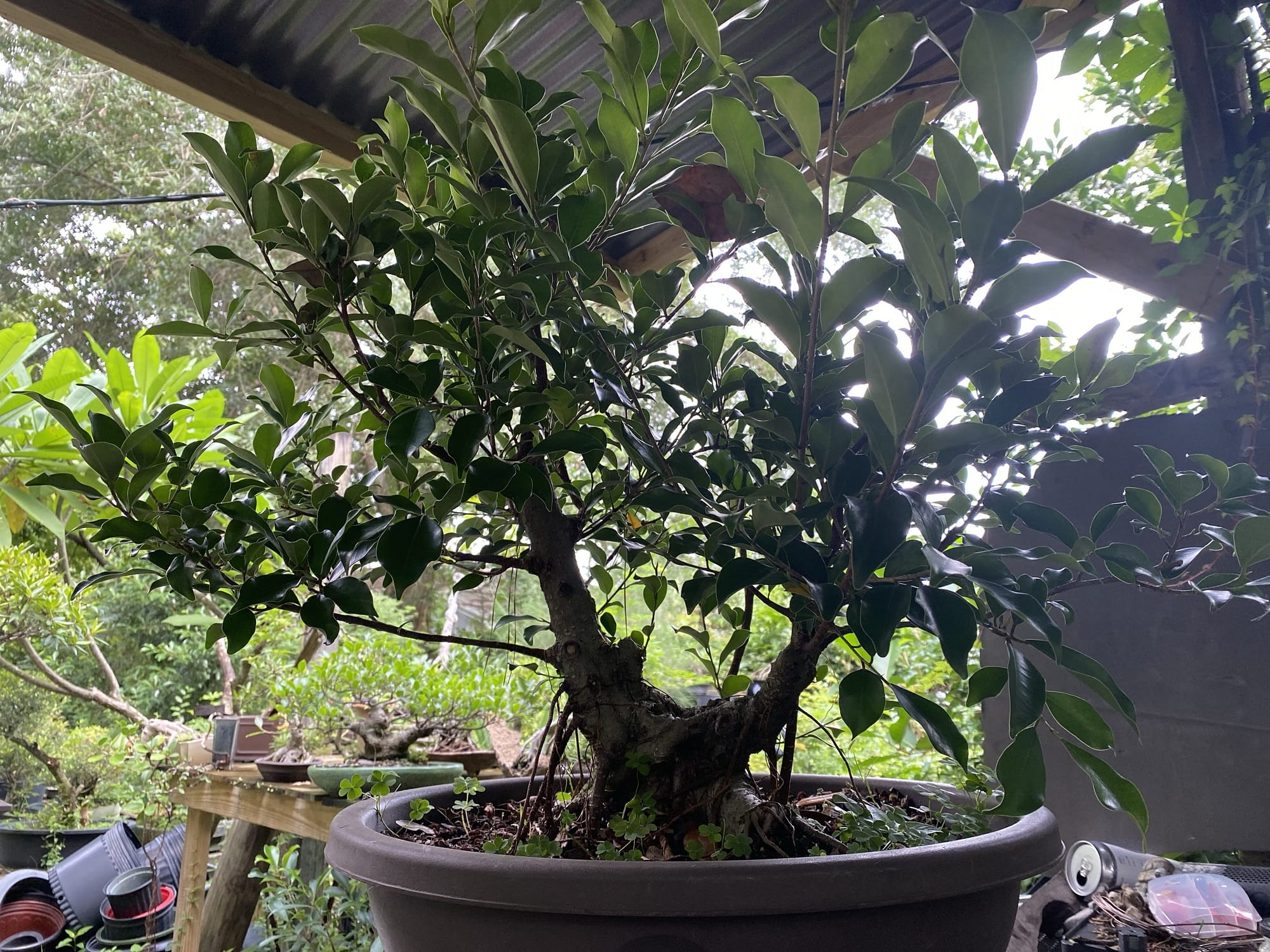 Well, for the life of me, I can’t find the first chop back photos for this tree, from several months ago……wait, let me check one more time….

Here we go, from May 2, 2021. It is a Ficus microcarpa that volunteered in one of my student’s yard down in SW Florida, so she dug it up.

Now, first, some botany on ficus (why doesn’t Mr. Miyagi have any ficus bonsai? He’s never “botany”….sorry) anyway, the “flowers” (or “inflorescence” as it is a flowering body) are a special structure called a syconium (for the Latin language curious, the plural form is syconia, though it sounds, to my ear, that it should be the other way around). Think of syconia as outside-in flowers, with all the reproductive bits inside the structure that will eventually become the fruit, or fig (a fig is a ficus, a ficus is a fig)

The way most figs are pollinated is by a specific species of wasp for a specific species of ficus, which then climbs into that syconium and looks around. Unfortunately for that wasp, it gets trapped inside the soon-to-be fig and becomes a part of the fruit (don’t worry about the figs we eat, which is from various Ficus carica varieties like Mission or Turkey, as they are what the pointy heads call perfect, meaning they self pollinate without the need of a pollinator. So no, you aren’t eating dead ficus wasps in your fig newtons).

What does all of that have to do with our tree today? Well, I’m glad you asked; somehow, we in Florida either imported the specific wasp that pollinates Ficus microcarpa; they are native to China, and we import hundreds of thousands of ficus for the bonsai trade, those dreaded S-curve ficusses for sale everywhere (here’s a good post on some S-curve treatments as regards to them. And if you follow the backlinks you’ll learn some air layering techniques, nomenclature in fighting, cutting strategies, and a really bad joke you can tell at your next bonsai gathering).

The state of Florida is actually considering banning the sale and movement of Ficus microcarpa for fear of it becoming invasive and supplanting our native strangler fig in nature (Ficus aurea). That would severely ruin the various bonsai nurseries that rely on importation as a means of revenue. Might be why the importers call them Ficus retusa…….the same reason the Chinese elm is often called “zelkova” in the bill of landings on the ships, instead of Ulmus parviflora….but that’s just me musing. Chinese elm has been prohibited for importation ever since Dutch elm disease came to the USA.

Anyway, back to our tree, which technically could be considered a “ginseng” ficus, since it’s a seedling F. Microcarpa.

Again, from about three months ago….

And today (end of August).

We have new branches and some more aerial roots to work with. Let’s get it cleaned up, shall we?

I like how this side is filling in. Especially the roots.

Below, this was the front we went with at the class…

I think I’ll change it slightly, as often happens when new growth appears.

One downfall of the original front was the window or slingshot effect created by the two main trunks (we are going for a banyan style, which has more than one trunk. You can read about it here and here). So I am letting this branch (below) grow into another trunk, to fill in the negative “negative” space, as opposed to positive-negative space, which sounds like jumbo shrimp, I know, but there’s good and bad negative space. Basically, if it adds to the composition (how your eye moves around the tree) it’s good. If it stops your eye, it’s bad.

Let’s get rid of some superfluous new growth and refine the branching.

Let’s get that work done and see what’s left.

A good pruning. I’m not happy until I have a pile at my feet.

But not too much taken off. Now let’s clean up some roots

The ones are right in front now.

We left them in to see what would happen, but now they obscure the trunk. Sometimes that’s a good thing, but not in this case.

Now let’s sculpt this side

We want the roots to ramify as well, so when it doesn’t, on ficus or other trees that heal (like tridents) we can split them and then spread them out. and we can spread out the aerial roots too, editing out some that cross.

And we were leaving this knob to add some cragginess, but I suddenly don’t like it (artists prerogative).

Now for some structural pruning and wiring.

I think I’ll get rid of this branch, after the rotation. It’s too far forward, what we call an “eye poker” meaning we don’t really see it as a branch, just a blob of green.

Basically, go to your basic styling concepts: only two branches at each branch junction, prune for taper and movement, alternate each branch, etc.

I tend to hold the branch down to where I’ll wire it to when I choose what to cut off.

The biggest cut is at the top.

This is a “cut for taper and movement” chop, something that’s done at the top a lot as most ficus are apical growers.

The new “apex” is nowhere

Now, big wire, then more pruning, and then some detail wiring and pruning

Getting near the end. You’ll notice that many small branches I’ve left un-wired. For a demo, I might wire them, (for the show, you know, as that’s what the audience is there for) but this is for development and the wire won’t hold and most likely, that branch will get cut off in the final design or drastically shortened.

I’ll cut some growing tips for back budding purposes, but leave some to lengthen and elongate the branch.

And that’s about it

That tiny branch needs to grow more. With leaving the grow tips and opening up the canopy to the sun, it’ll catch up quickly.

And the new front.

That’s some good development for a few months. Keep an eye out for updates.