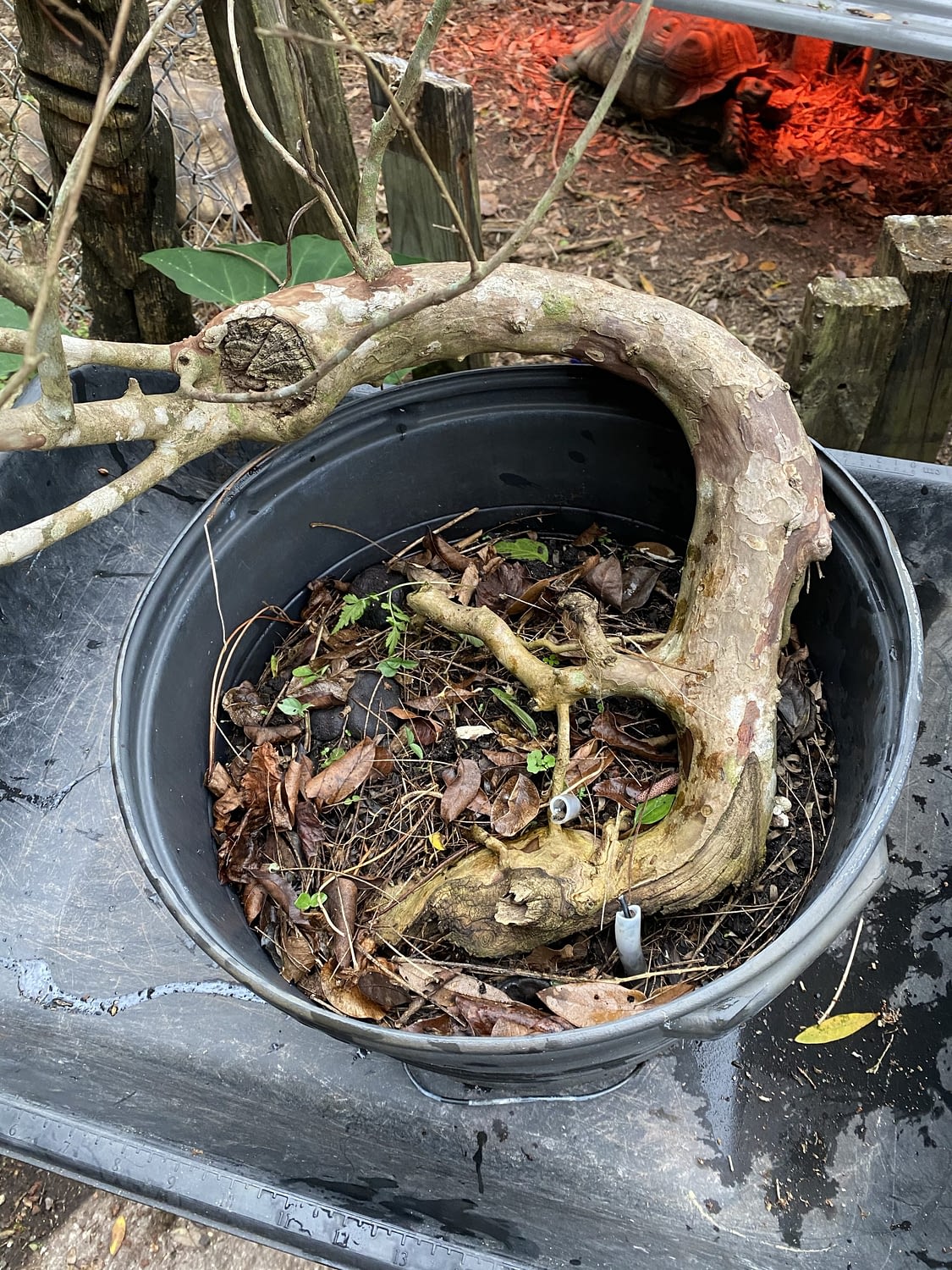 A Lagerstroemia indica variety. The bark looks like the “Natchez” cultivar, which would mean big leaves and a white flower. I’m not sure though so we will have to see when it wakes up and flowers.

I don’t know the exact origin. I got it from my friend Nick, who got rid of most of his trees.

The big problem, as with most crepes when they are chopped, is the reverse taper they get because they put out so many new shoots after the chop and grow like crazy.

Which can be used to affect some trees, but not this one. We need a good, uninterrupted line because of that crazy trunk movement.

The roots are loose, so it might have been a big cutting at one point.

Let’s sit back a bit and study it.

Well, that doesn’t help much in a pic. Let’s get closer. The tiki guardian isn’t impressed…

Not a better view. Let’s take it out of the pot.

See the dead spot on the roots?

That’s what makes me think it was a big cutting at one point. Crepes can grow from huge cuttings. Like six-inch across pieces (more than 15 cm).

This view helps, I think I like this angle:

This root is interesting:

It’s self grafted, inosculated, as the pointy-headed scientists say.

Here’s the long shot, to contemplate.

Let’s doodle, shall we….

We can go here:

Chop the whole end and go with just that one shoot as the trunk line continuation.

Or here, keep the one, and the end, going with the strongest shoot for the trunk line.

That one has the least movement, so probably not that one.

Those ones not so bad.

Now then where’s my saw?

And that one in the back will go too…

That’s a start. They say the first cut is the hardest. But they pay me the big bucks to make those cuts, so I make it look easy.

I’m going to try to bend this one.

Even though it’s a thick branch, I think I can get some movement.

This is kinda knobby, but I think it’ll work. We will see at the end I guess.

Let’s see what some bulk removal does…

Some nibbling with my big knob cutter.

Now for some power tools…

I don’t really consider this carving, but I am creating a deadwood feature, so I guess you could call it carving.

Before the carving, the establishing shot.

What I want is for the new carved places to roll over like here eventually.

Which will happen quickly on a crepe.

The idea is to get a shape that works.

I don’t need to detail carve it as the wood rots quickly and it’ll just be to show off and show you how I can make it look old. Time will do that for me.

Ok, that’s done, let’s get it into a training pot and then some wire.

The soil was broken down pretty badly. Good in a deep pot but in a bonsai pot the small particles hinder drainage. Here’s a quote: “it doesn’t matter what your soil is made of, it’s the particle size that helps or hinders drainage”

When making soil, get rid of anything smaller than 1/8 of an inch (about 3mm). To answer the most asked question about soil, we use bonsai soil (properly sifted) because of the seemingly contradictory fact that the more shallow a pot is, the less it drains. So we use soil that drains better. Components that don’t hold water as much, that don’t break down, and that have a matrix with a proper ratio of water to oxygen (about 50/50). And the smaller the particle, the more water it’ll hold.

Looks like it fits, at least for an initial potting (the roots will form a more solid base as it matures, the reason we often use a training pot and don’t go into a finished pot during the initial root reduction).

I love that we have a good assortment of training pots recently. Wigert’s sells this type of pot, among others.

The tie-down I use wire is a little thicker than you usually see. This time I’m going even thicker, I believe it’s 3.5mm

I find that thicker wire holds better just by being thicker. One, it’s stiffer. Secondly, it doesn’t stretch as much over time.

Ready for the tree.

Some of my SuperMix…

And tie the tree down well…

That’s sitting up all by itself, snug and secure. It ain’t going anywhere. Talk about bondage.

Backfilled with soil and chop-sticked in place, making sure to get the soil in between the roots.

And then some wiring.

That’s a good start. Now, just “Let it grow” as they say.

Can you see the dragon?