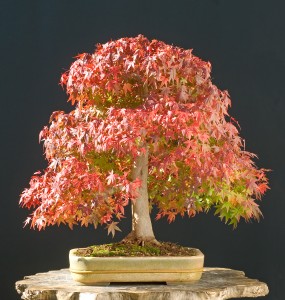 Because of their vibrant colors, moderate growth rate, and overall scalability, these trees are frequently trained as bonsai. Another compelling reason to use Japanese maples for your miniature tree is that there are many cultivators, or genetic strains, that are already dwarfed and easily trained.

I will go over the fundamental strategies that must be understood when owning and training a Japanese maple bonsai.

We recommend checking your miniature trees for moisture on a daily basis, but this species will probably need to be watered every day during the growing season, and every other or every third day in winter, depending on your soil drainage.

Placement of your Japanese Maple Bonsai

Japanese maple bonsai are typically grown in temperate zones and require a real or simulated winter in order to survive. As a result, these trees are typically used as outdoor bonsai. This tree is typically grown in partial shade, but it must receive some daytime sun because this is what produces the red pigment in the fall. It is critical to keep this tree in a shady location in early spring to avoid leaf burn. For about a week after sprouting, newly sprouted leaves are vulnerable to sun damage.

Leaf pruning is done throughout the growing season to control growth and keep the tree balanced. To force the tree to grow in other areas, new shoots should be pinched back in areas of the tree that do not require new growth. If the tree is healthy, it can be defoliated in midsummer.

By removing the older, larger leaves, this process forces the tree to grow new leaves. The new leaves will grow back smaller, increasing the tree’s foliation. To avoid excessive bleeding, branch pruning is usually done in the autumn after the leaves have fallen.

Every other year, repot this species to replace the soil that has had all of its nutrients washed away. Maple prefers well-drained soil. To prevent the tree from becoming rootbound, cut back the roots by up to one-third.

To encourage vigorous growth, it is critical to fertilize Japanese maple bonsais with a good slow-release formula. Feed this tree once a week during the growing season to encourage rapid growth.