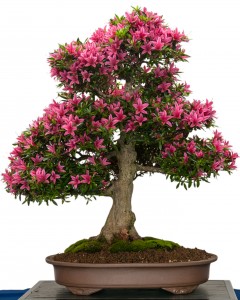 Because of its lovely flowers, the Azalea is one of the most popular bonsai trees. Even when not in bloom, the Azalea bonsai is a stunning green because it is an evergreen tree.

The Azalea plant comes in a variety of colors, including red and pink flowers. White flowers can be found on some Azalea trees. However, the most popular variety that is recommended by the majority of people and is widely available in the market is Satsuki Azalea.

Satsuki Azalea bonsai is one of the most sought-after indoor bonsai species that is regularly available. When grown as bonsai, these miniature Azalea plants look stunning. When in full bloom, they produce a large number of beautiful flowers and are quite attractive. They typically bloom in late spring and come in a variety of flower colors. Azalea bonsai have smaller leaves than most trees, making them ideal for bonsai.

Do you want to grow your own azalea bonsai tree? Let’s go over some of the most important azalea care considerations.

Azaleas do not thrive in dry soil. They require moist soil at all times, so daily inspection is essential. Dry roots will quickly shrivel and die, leaving you with a dead plant. Azaleas dislike lime, so whenever possible, use lime-free tap water or rainwater.

Placement Of Your Azalea Bonsai

This species prefers well-lit, shady areas away from direct sunlight. They can thrive in partial shade if necessary, but make sure that the midday sun is filtered. This tree thrives in diffused light or partially shady conditions, which are ideal for flower production and maintaining the health of a Satsuki Azalea.

When wiring your Azalea, use aluminum wire rather than copper. Because of the brittle branches and soft bark of Azalea bonsai, aluminum wire, which is softer than copper, is better suited for training. After the growing season has ended in November, wire this miniature tree. This species is commonly trained in semi-cascade, windswept, slanting, or informal upright styles.

Because Satsuki Azalea bonsai prefer acidic soils, adding extra peat moss is recommended. Peat moss also aids in water retention while allowing air to reach the roots. The best time to repot this type of tree is before it blooms. A large portion of an azalea’s feeder roots can be removed. Do not prune the thicker taproots, which are less common. Repotting can also be done later in the season; just make sure to remove all flowers; you want the tree to focus on recovery rather than flower growth.

Satsuki Azalea bonsai prefer an acidic fertilizer without lime. In the spring, fertilize this bonsai every other week. While the tree is flowering, stop feeding it fertilizer. If you don’t take a break, new leaves will overpower the flowers. Switch to a monthly feeding of high phosphorus fertilizer in the late summer and early fall.