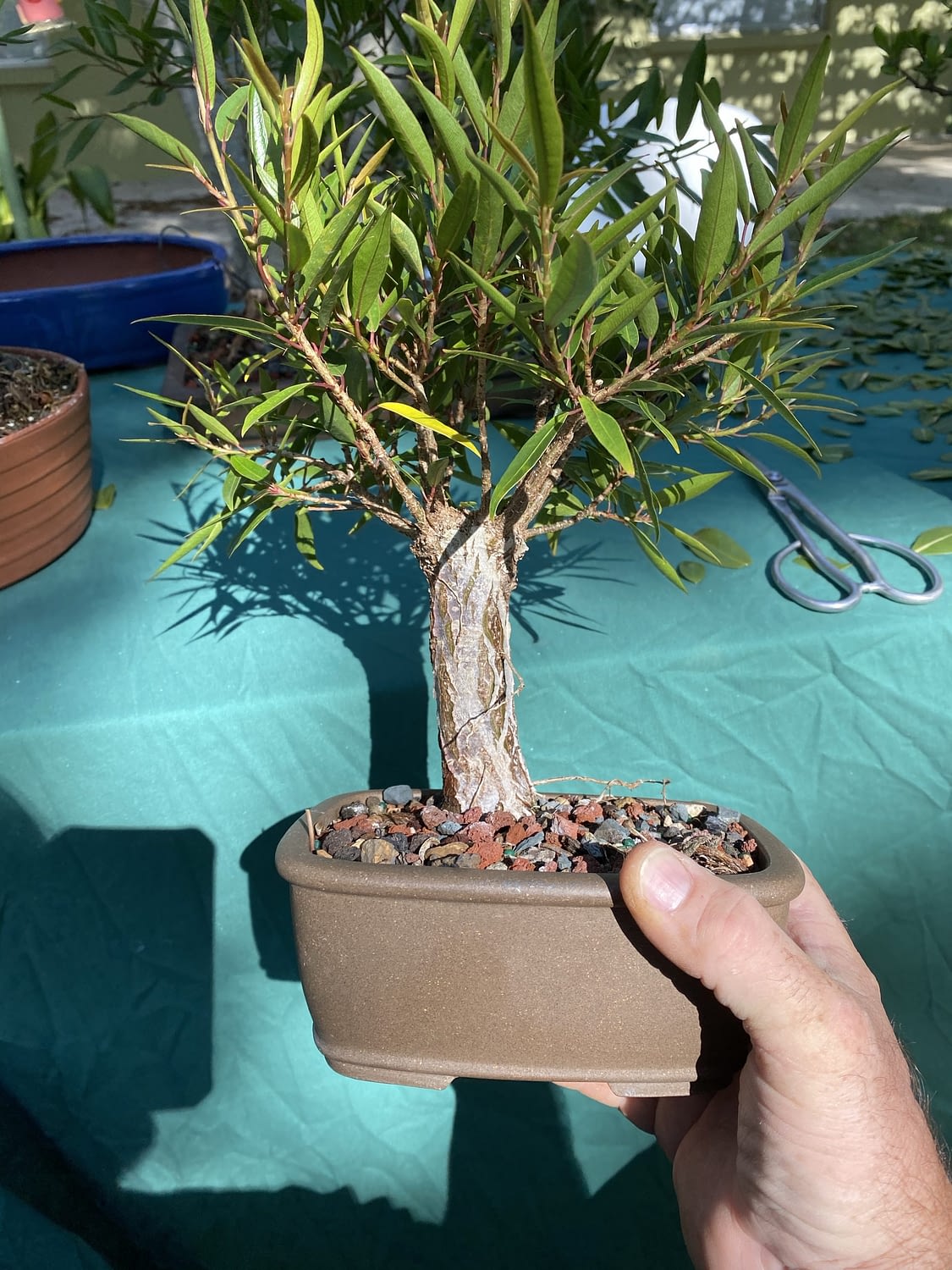 Here’s an example of a little tree that you might run across easily, at a retail store or maybe your club’s raffle table. Hell, I’ve seen them at Walmart before. It’s a willow leaf ficus, Ficus salicaria (often misnamed Ficus nerifolia, F. Salicifolia, F. Subulata, et al).

This one happens to be a root cutting, meaning the “trunk” used to be a root of a larger tree that was chopped off during a repot, saving the smaller hair roots, and planted in its own pot. When you make root cuttings from F. salicaria, you only tend to get new shoots from the top of the “trunk”, like below:

That’s the one drawback with a root cutting on a willow leaf. There was an infamous root cutting I showed several years ago, not as a bonsai, but as a highly directional companion plant (and people couldn’t understand that concept. It was clearly not a styled tree, but just a plant in a pot, but I’ve been accused of being too subtle at times, to the detriment of the joke) that showed this characteristic.

Anyway, that’s beside the point of this tree. This one is from my student, Rick, from the Ft. Myers study group.

It’s growing well, and ready for some styling.

Here are all the branches coming from the top. A big mess.

I have an idea, let’s see what happens and how it turns out…

The usual course of action is to leave just two shoots, one for the apex and one for the first branch. But like I said, I have an idea. Let’s remove some of those branches, at least.

There we go, now what?

How about we split the trunk?

Yup. Let’s try that. Some grafting tape to help the tree stay apart and heal.

Both sides taped up. It’s not technically tape, no stickiness, that’s just what they call it.

Now a wedge to get the trunk to split apart even more.

And now we have something interesting to work with.

The idea is a modified broom style (which would look much like its name, a broom).

Choosing the front, with one side slightly to the front.

The advantage of this is to preserve the larger branches and give the tree a more natural taper.

Maybe spread the cut some more and…

Let’s see how it goes from here. You can do this on pretty much any ficus, as long as the trunk splits and can be moved. I’ve seen this on pines and juniper even. Trees are pretty adaptable.

Instead of the cliche “one branch up and one to the side” option, I thought I’d go radical and crazy. What do you think?