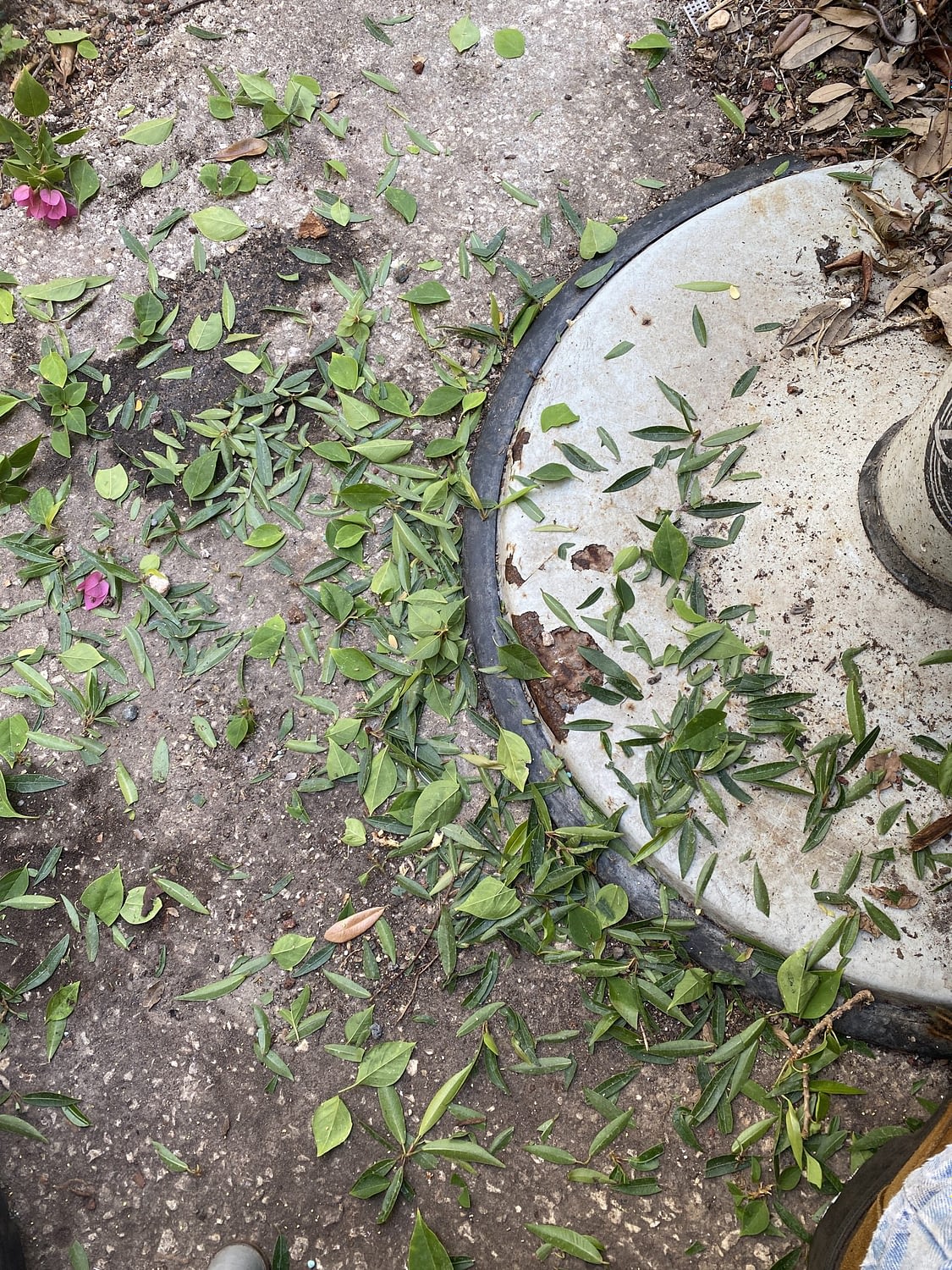 Sorry, it’s been a while, my life has been occupied by a whole bunch of traveling, client work, private sessions, study groups, and the recent Bonsai Societies of Florida annual convention (Look for a recap and the pictures from the exhibit over on The Florida Bonsai Magazine page, next month) of which I was the Co-Chair. The headliners were Jennifer Price, Martha Goff, and Lourdes Arnaez. Three amazing ladies in what we believe was the first all-female lead major convention in the USA. A historic occasion.

Later this month I’m taking a tour of Ohio, which was postponed last year, so I needed to get some work in before I go. Here are three trees from that work. And the mess:

First tree. It’s satisfying to work on a piece over a few years, like this willow leaf fig (ficus salicaria) from an Orlando client, Susan. Shaping it and seeing it develop.

It’s been several years since I’ve been working her trees; this one originally came from a workshop led by Ed Trout that took place at Schley’s Bonsai and Supply.

The ramification is building nicely, the main branches and the apical branch are just about set in place, and the roots are developing well.

I last worked on it in December 2020 (Orlando Fl) and did some sculpting on the root spread. Here it was way back in March 2020:

Notice the difference in the branching and roots. And it still had the guy wires holding the main branches down.

Oh, I also changed the front.

Here’s the second tree, my own, but purchased from a student in my study group, Debbie (seen in This post from last year).

The maintenance here was to remove the wire and cut it back. It’s not gonna be pretty for a month or so, but that’s sometimes “The Way”

Everything today will get fertilizer and a refresher treatment of a pre-emergent weed preventer.

And last, a tree I’ve had for a long time, but it’s only been seriously worked for a few years. Another ficus tiger bark. An ugly one too (from This post)

This one will get the same treatment as the first f. microcarpa, remove wires, trim, fertilizer et al.

You get to see the “before” pics too.

Choppity chop. Dirty but useful. I call it a topiary trim. The idea is to force back budding and, therefore, ramification.

This is the one I recently used a wedge cut and guy wire to lower the first branch on the right. It’ll stay to help it set.

Seems to be holding well, and that saw cut hasn’t slowed down the branch, seemingly, at all.

Below is an example of how much fertilizer I generally use. Not a lot, as you see some use, and I mix it into the soil a bit and put a top dressing of new soil over it. Nobody wants to see little blue balls at the base of their trunk.

And that’s it. just some quick maintenance of a few trees. Not everything you do needs to be a monumental undertaking, bonsai is done over time using simple techniques that are repeated and repeated at the right time.

Sometimes there’s a big chop, and that’s dramatic and cool and all, but it’s the small work that builds a tree

As I said at the beginning, I’ll be touring Ohio this month (June 2021), from Cincinnati to Louisville KY, to Toledo, and then culminating in a big outdoor festival we are calling “Bonsai, Blues, and Brews” in Xenia, Oh.

Consider this a formal invite, and bring your dancing shoes. Not only will there be a bonsai demo and byot workshop, but I may also just get on stage and play a song or two

(Also, Xenia is right down from Yellow Springs, there might just be someone more famous than me coming by…..,)

I think it’s time for a bonsai road trip, don’t you? So just show up or send me an email (adamaskwhy@gmail.com) with any questions. See you then!