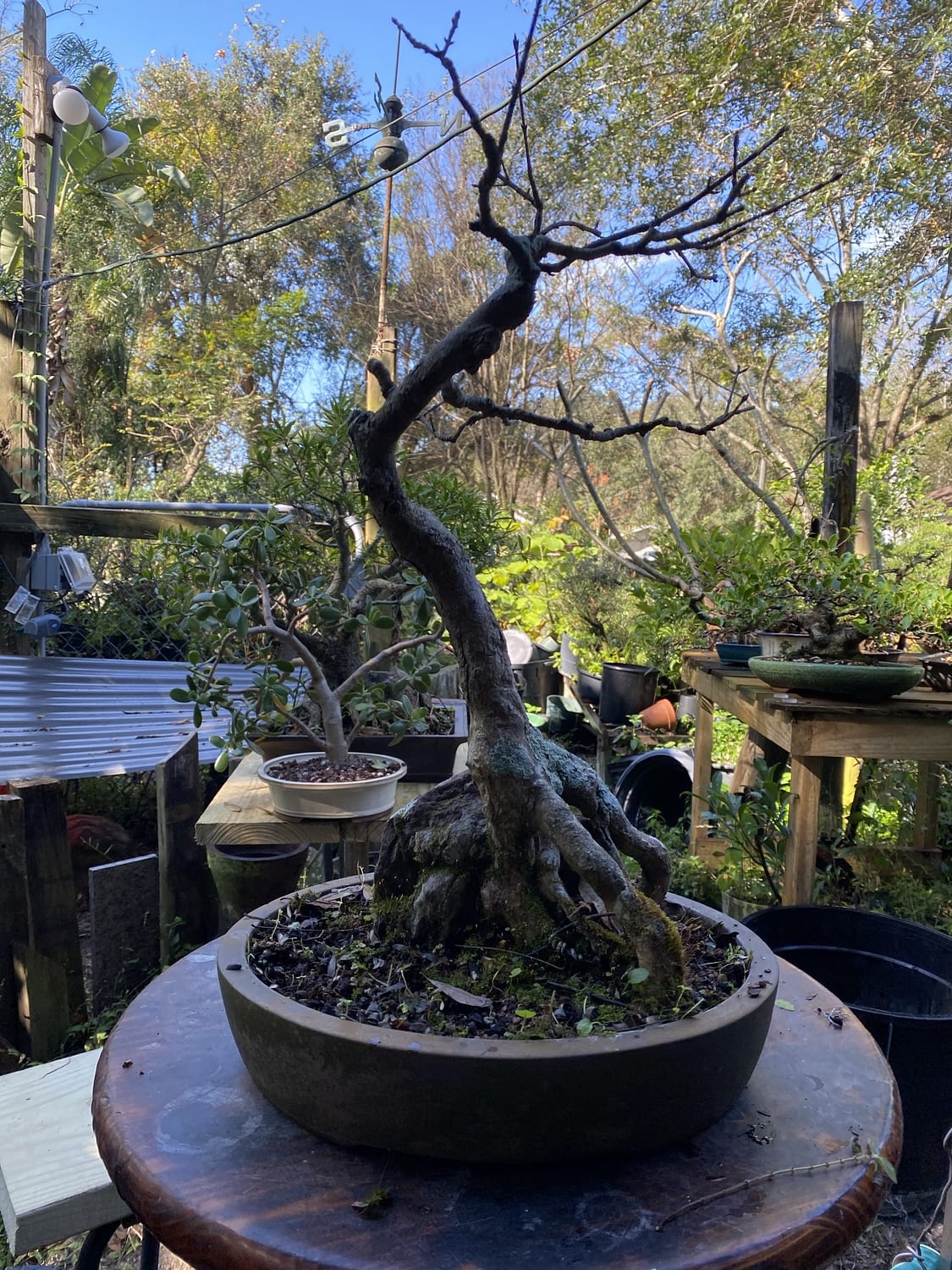 This Acer buergerianum actually belongs to my oldest son, but don’t tell him. I’ve neglected the tree for a few years.

Anyway, this tree was the smallest of the ones in the ground and Cliff told my son he could have it if he dug it up himself.

So my son did just that.

The roots are kinda funky, as you can see, and that’s why there’s a rock stuck in them.

Are you liking the lichen?

Many people don’t. I think it adds some age and texture. The only time you may want to remove it is if you’re trying to get the tree to back bud in a spot covered with it. The easy way to get rid of it is Listerine or hydrogen peroxide and a toothbrush.

Looking at how the way the buds on a branch grow, you’d think it would be easy to manage new growth. You have definite nodes and internode space, and the buds are opposite, and alternate, growing horizontally and then vertically, up and down, on the branch. So if you want the branch to grow up, remove the bottom bud, or left/right, etc.

Also, on the above branch, the growing tip tends to split into three or more new buds.

In the pic below, you see the node by my middle finger is growing up/down, and by my index finger, they’re growing sideways.

And it alternates: up/down, side to side.

Here’s a Blog Post where I explain how to really deal with the new buds on a trident, and it also happens to have the tree I got from Cliff all those years ago (if my math is correct, it’s been about 12-13 years, so that would’ve put my son at about ten years old when we got this tree. Damn I feel old now).

Let’s turn our attention to the root of the problem…..

Sorry, but since I’m an old dad, I am contractually obligated to make Dad Jokes.

Using your best steak knife, saw around the edge of the pot to release the roots.

That’s a few years of roots right there. No wonder there was some branch dieback and almost no new growth.

Rake rake rake (there’s a song in that earlier Blogpost, someone should record it….).

The preferred action is to pull the rake from the center, outward, radially (like the spokes on a wheel) until you untangle the roots. Gentle-like and easy.

I usually begin on the surface and go deeper into the root pad as the roots untangle.

Since it’s been a few years between the last repot, the root pad is circling around like a racecar in a Nascar race. Describing an oval for 500 miles and going nowhere.

I’d say, after I stretch them out, the roots are about six feet long (almost 2 meters, my European friends).

Now, if this were a normal repot done in a responsible and timely manner, how much would I cut off? It’d be at about the same place.

I tend to cut to the closest lateral off-shoot root (that’s fun to say) towards the base of the tree. The principle of reducing roots is to get rid of the larger ones (their main purpose for the tree is to hold the tree in the ground, and since we tie ours into the pot, they’re not needed…as much. They do store sugars and a weak tree shouldn’t be cut back so much on the roots) and to reserve and save the small, feeder roots, which are what really do the “work”, namely water and nutrient uptake from the soil, and respiration at night.

Now for the pot.

Washing the dishes. I don’t tend to scrub my pots as they call for in all the old books. And no soap or bleach, I just spray it off.

New screening. And yea, it’s galvanized metal mesh, and no, it won’t poison the plant.

Let’s review heavy metal buildup in the soil and poisoning of plants by said heavy metals (iron is a heavy metal btw, as are most nutrients plants need).

For a plant to be poisoned, the soil has to become contaminated, dramatically, over time. That’s the phrase…” overtime”. We repot and replace a tree’s soil so often that there’s no build-up of heavy metals. So using a metal pot, or copper (any metal really) wire to tie the tree in, or even wire on the branches, won’t greatly affect a tree.

And some fertilizer. Chicken poop, with added bacteria and mycorrhizae. I know, it’s not usual for me to fertilize a deciduous tree before the leaves come out and harden off, but remember it’s been several years since I’ve added anything, and this is pretty mild stuff anyway, it won’t hurt.

The reason we don’t fertilize deciduous trees until after spring growth comes is that the leaf size and internode length will increase the more fertilizer you add.

Now for some wire. Before:

And for those that like to point out that the style of this tree isn’t natural, I’ll say,

“Not natural? Of course, it’s not natural. None of this is natural, I mean, bonsai, and bonsai Art. And this is art. We are taking a tree, in this case, a trident maple, that can grow 20 to 35 feet tall, being artificially small in a pot made from clay that’s been kneaded, shaped into a perfect oval, with a lip and drain holes even, fired at a high temp, and sitting on a display bench. Add wires, odd “soil” that’s not soil, fertilizers that have been literally mined out of the air for nitrogen, or collected from overly shitty chickens in some factory farm in the Midwest USA somewhere. None of it is natural. And I can make the tree look how I want, as long as,to the tree, it doesn’t matter. Because if it dies, it’ll tell me that it doesn’t like a branch in that spot. Or if the branch is below the horizontal. Or the pot is too shallow or not shallow enough. ”

I let the tree tell me what it wants. And a trident is one of the trees that is what I call “plastic”, meaning it can be styled in just about any habit, be it deciduous, weeping, cascade, or even like a pine tree.

I had a moment today, between finishing a client’s project, and an iced coffee, where I sat in the shade of my orchid tree. I was weary. I hadn’t slept well the night before. It was a Diphenhydramine night, which tends to leave me groggy all day.

The afternoon, an early February afternoon in Orlando Fl, about 85° F. Dreamy and warm. A breeze would build and dissipate, but mostly it was dry and warm.

I closed my eyes and played with the shapes as they formed behind my tired eyelids.

The voices came as though someone was talking in my ears, half-heard. The shapes built and receded like a sound engineer’s bad dream. Feedback loops like infinity.

The moment lasted forever but it was but a few minutes. A few minutes of time washing away the next moment as though it were a wave and the tortoise was waiting for the next bit of roughage and spice to snack on.

I was washed clean.

And then I had to go to the Dollar General for an aluminum tray for the night’s meal, a lasagna I had been planning since three nights prior.

Life is the process. The act. Gather wood and collect water. That’s the beginning. But that’s the end too. What your doing and where you’re going doesn’t matter. It’s the way, the path. The steps. If you can’t live in those moments, you can’t live.

You realize your vision and your perception, though seemingly on time, is always behind the real. Try to catch up and you’ll fall behind. You’ll be trying to see what has gone behind. Anticipation is not possible. Reactions are the now. Or they’ve always been that way.

It’s been said that all stories begin on a beach. The gentle waves advancing or the giant water crashing in. But I like my garden. My story begins and ends in my garden, with the trees. It’s as though they’ve always been, and they’ve always looked the way they are, I just have to remove the unnecessary. Little trees and little lives I can relate to.

The moment passed and I had peace for a time.