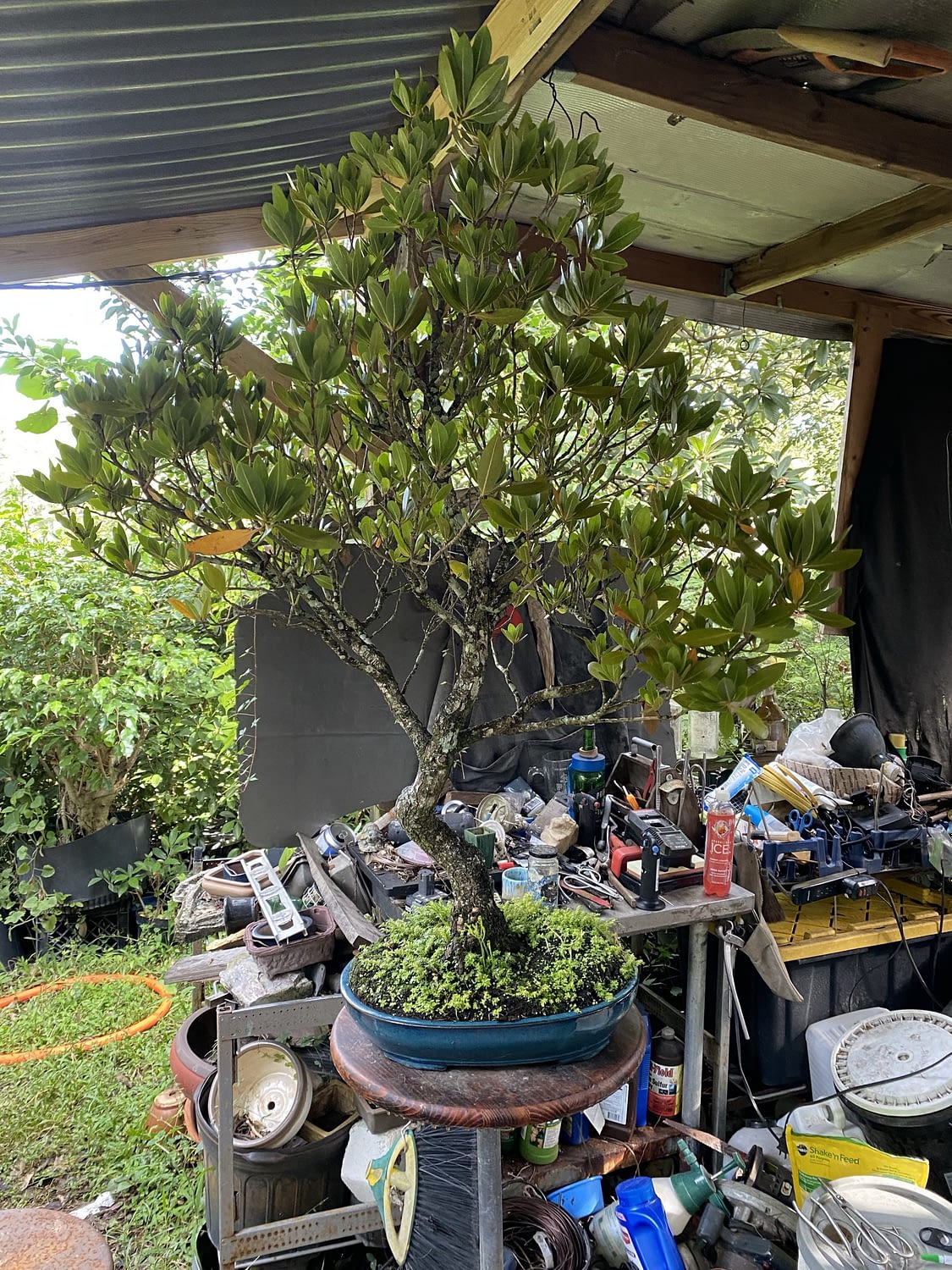 I need to do something about a client’s Conocarpus erectus, a Florida buttonwood.

The tree is tall. My client purchased it a few years ago from Dragon Tree Bonsai on Florida’s East Coast in Palm City. It hasn’t been repotted since he’s had it (partly my fault due to my hectic travel schedule, partly his, as he’s the owner of a growing body shop, an ethical one that refuses to use substandard parts or allow insurance companies to only pay for patchwork). Talking with him really opens your eyes to the cost-cutting insurance companies and other body shops that will go to any length, often in tandem, to save money. My client spends upwards of $40,000 per year on factory training to learn what it takes to repair a modern car so that it is not only cosmetically correct but also safe. Today’s automobiles are designed to perform in a specific manner in the event of a collision, with crumple zones to reduce force and occupant injury while also ensuring that sensors, airbags, and reinforcement structures perform as intended. And he goes to bat, even providing digital documentation for his clients and their lawyers, factory specs, and so on, so that if the insurance company pushes back, the client will win the lawsuit against the insurance company, if it comes to that. I try to surround myself with people who share my client’s moral values. As a result, he’s always on the go).

This brings us to the standard for repotting buttonwood, in Florida, in October. Short answer: We don’t generally do it at this time.

But, looking at the roots:

It needs something done. They are pushing the tree out of the pot. My experience with buttonwood and going through a Central Florida winter pot bound, as this one is definitely….

This makes me concerned about its health. The standard procedure for repotting buttonwood is to wait at least 6 weeks after repotting if the nighttime temperatures are above 70 degrees Fahrenheit (22 degrees Celsius). This gives the roots time to recover before the arrival of winter.

Buttonwood in this shape, in my experience, does not survive the winter. It may lose its leaves completely (the Conocarpus erectus is classified as a semi-deciduous tree, so this isn’t necessarily a bad thing), but it is prone to losing branches when dormant, sometimes significant ones. This is bad for bonsai). And, once again, dormant buttonwood takes an eternity to recover in the spring, in my experience. One that has been repotted in season and worked, pruned, and fertilized will grow for the duration of our mild winter and will begin to grow again when temperatures rise. I’ve had buttonwoods dormant until June, not pushing new growth and losing fine ramifications.

This tree is in desperate need of growth right now. The leaves are far out on the branch tips, there is little back branching, and the color of the leaves is off.

Now, to address a common question I see about every tree in the online forums, here’s a yellow leaf:

“What’s wrong with my tree?” is the question. Usually accompanied by lamentations and a great deal of hand wringing

If you look up at the previous photo, you’ll notice that it was an older leaf, about 7-8 leaves in from the growing tip. It’s perfectly fine for those to be yellow. It can be found on any tree, whether it’s a juniper, a ficus, or a pine because it’s just an older leaf about to fall off. Don’t be concerned. The tree is fine as long as the growth tips aren’t yellowing. If the yellowing or damage is on new leaves, consider your watering, sun exposure, when it was last fertilized, and the strength of the soil, among other factors.

Back to our tree…

So what’s a professional bonsai artist to do to make sure this tree not only survives the winter but thrives?

Those that read the title, they know, for those that didn’t, I’ll slip pot it.

Initial pot: when removing from a grow pot and reducing the roots to fit into a training pot or bonsai pot.

Repot: pruning the roots of a tree in a bonsai pot already.

Up-pot: taking a tree in a grow pot and putting it into a larger grow pot.

And finally, for this post, Slip pot: taking a tree already in a bonsai pot and putting it into a slightly larger bonsai pot.

We usually do this for the health of the tree, as with this buttonwood.

And, as you see, it’s a little bigger than the older pot:

Let’s get to work and stop talking.

-which you’ll note is a single tined one (my preference), I loosen the roots of the larger weeds. Here’s a video of the first step, pulling the weeds, using the hook to loosen the roots. There’s some very satisfying weed pulling footage there:

It’s important to get the roots on artillery fern or they just grow back.

And here’s a video of the action I’m using to get rid of the smaller weeds. Kinda like hoeing a row in a garden bed (if you look up videos about this technique, make sure you don’t commit a Spoonerism and type in rowing a ho…..that’s a completely different type of video).

Organic matter abounds in the soil in which the tree is currently growing. Some believe that because buttonwood grows naturally in swampy, brackish water-soaked soil just above the shoreline’s mangrove area, it requires more organic components to help hold water. And they will thrive in that setting. Many people used to believe that adding salt to the pot was also a good idea.

However, the landscape industry (as well as many bonsai practitioners) have shown that buttonwood grows just fine in regular potting soil (or standard bonsai soil) and does not require salt. Just because a tree has adapted to a specific biome does not mean that it will not grow well, if not better, in more ideal conditions. It all comes down to determining how to water in the container and soil you’re working with. This means that buttonwood should not be allowed to dry out too much. Whenever possible. And, by all means, if watering necessitates the addition of more organic or wetter (smaller particle) soil, do so. Because of their work schedules, some people can only water their plants once a day. I’ve also seen portulacaria and pines thrive in pure pine bark. The most difficult aspect of learning bonsai is said to be watering.

We use bonsai soil because it is easier to work with within the confines of a bonsai pot. Use what works for you, but be open to new soil concepts. Bonsai soil can and often does work best, but keep in mind that watering must be adjusted accordingly. I use what I use (I’ll explain my mix later in the article) because it works for my zone, the amount of rain, the amount of sun and shade, and so on, but many bonsai experts are dogmatic, insisting you use what they use. That, in my opinion, is at best short-sighted (though well-intended), because their experience had taught them what works for them.

Because it hasn’t been repotted in a while, the root ball is compacted and full of roots. I don’t want to rake them all out as I would with a full repot, so I’ll be poking holes as best I can to aid drainage and fertilizer penetration.

I push down where the resistance is least…

And wiggle the tool a bit to open up the hole.

Slip potting is similar to up-potting or planting a tree in the ground in a landscape. In most places, you can do it all year (except on frozen ground in the north, unless you use a pickaxe like you’re playing Minecraft). And, if you’ve ever planted a tree, you’ll know that you always rough up the roots before sticking it in the hole. This allows the roots to grow into the soil rather than circling the root ball.

Let’s get rid of that.

You’ll notice how much the roots have grown since the last repot.

Up to my second knuckle.

At the edges, I tease out some of the long roots.

And by long I mean long…

If this were a full repot, I’d remove many of the thicker roots to encourage more roots, closer in. But there won’t be many roots removed today, (mandatory in Florida, in October).

Except what falls off.

The pot. It is an older Chinese container. I’m not sure of the stamp, which on a Chinese pot, usually depicts the city the kiln is in.

When there are two, it usually refers to the city and the kiln. The number represents the Potter who worked on the pot. Potter #20 in this case. The lower the number, the better the potter. The person who has been there the longest and is a Master would be ranked first. At least, that’s what I’ve heard.

We are relegated to #20 today. That’s okay, this is a temporary pot until next June at the earliest.

I’ll mound the soil in the middle of the pot so that when I put the root ball down, it’ll fill in any voids in the root mass. Like where the screens were.

Then I place the tree in the pot.

And wiggle it into that mound of soil.

And, of course, it’s well tied down (that’s one of those procedures I insist on, similar to how my client follows the manufacturer’s repair specs). When I’m working on a client’s trees, the first thing I look for is a tightly bound tree in the pot. I’ll add more tie-down wires if it’s not secure.

And now to backfill with fresh soil.

My current soil mix is two parts scoria (lava rock in vernacular, for drainage, water retention, and air spaces), one part expanded slate (the grey stuff, the brand today is Espoma’s Soil Perfector). This is strictly for drainage. Inside the matrices, it holds little to no water). One part diatomaceous earth (the white stuff) and one part “small” fir bark nuggets for fertilizer retention (called CEC) (for fertilizer CEC, and water retention). I’d add pumice because it’s similar to lava but holds more water, but there’s a pumice shortage in Florida right now.

Make sure to fill all the air pockets, take your time backfilling the soil.

We do need air space, but not huge pockets.

Make sure you’re pushing the soil under the root ball too. Sometimes using the blunt end of your chopstick helps here.

Then, my last step is to tighten the wire on the bottom.

Pull down, and twist.

This really secures the tree.

To get this pic, alone in The Nook, requires some fancy camera work. Balancing the pot on my big head.

Look at all that grey in my hair. Man, I’m getting old!

Some fertilizer, in this case, granular organic from American Bonsai Tools.

Chopstick it into the soil because if organic fertilizer isn’t in the soil, it’s not being utilized by beneficial soil microbes.

And some pre-emergent weed preventers (I use a commercial brand called “OH2” but you use what you can find, something like Preen).

And that’s all there is to it for this year on this tree. We’ll let it grow until spring when a synthetic granular will be applied to the soil and the real work can begin. The client requests that some deadwood be added to it (much like a juniper, buttonwood looks odd without deadwood).

See you next year, my intrepid little buttonwood!