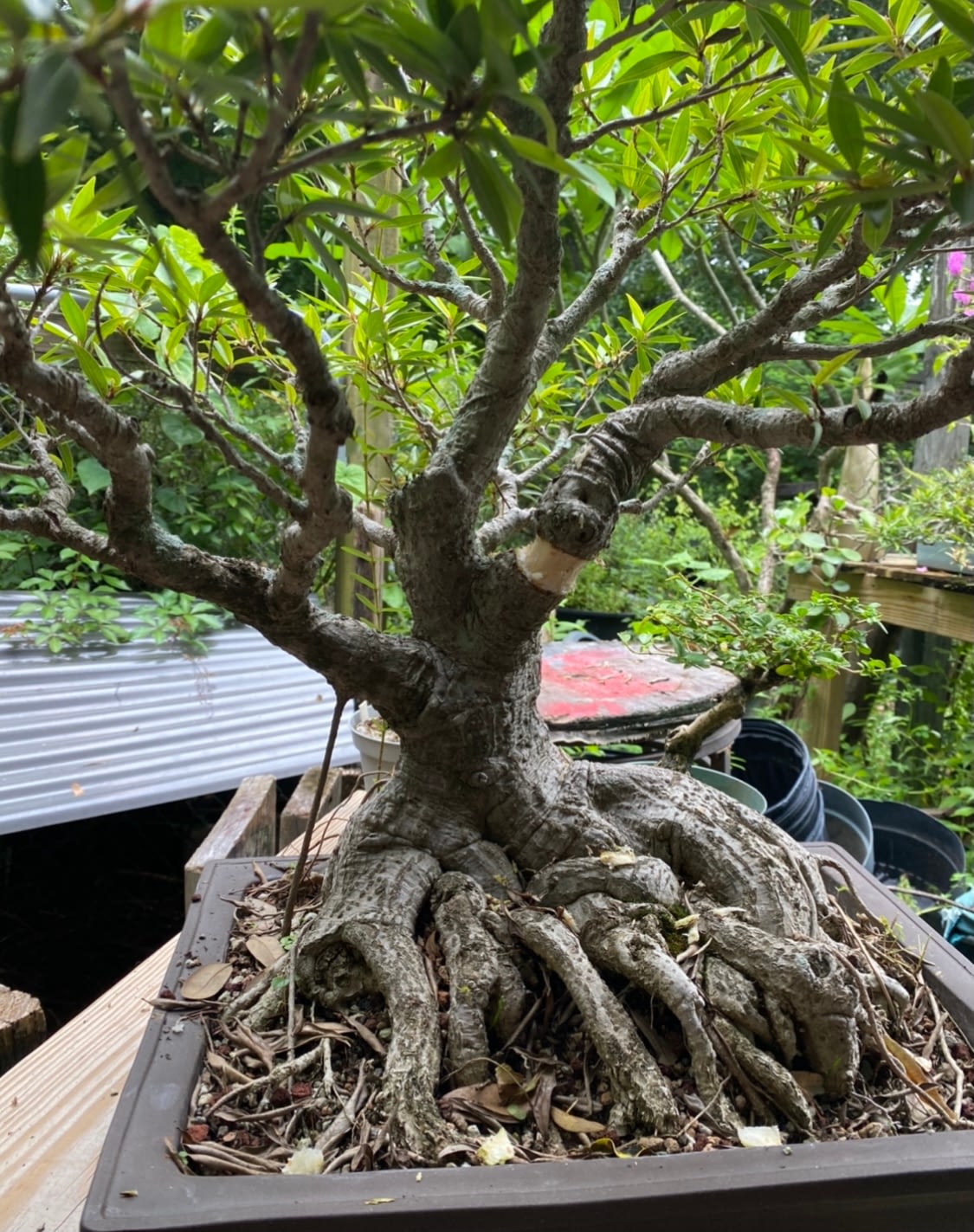 The tree belonged to a member of a Fort Myers study group who was downsizing her collection. Not downsizing in terms of numbers, but literally downsizing. It had to go if she couldn’t lift it.

Unless we can afford large machinery and young backs to lift our trees, it will happen to all of us. As for me, I intend to put large wheels on an engine Jack so that I can move the trees when I’m older (I must admit, I’m getting older. At least in my body, I’m still the brash, immature, iconoclast you all love (which could just be the non-grey version of the cantankerous, much complaining curmudgeon from central casting). I could see myself maturing into that. That is, of course, how my family ends up. You should’ve met my grandfather, whom we affectionately referred to as “Pee Wee.” He was old, greasy, and smelled like classic, lanolin-based mechanic soap, which he kept in a 50-gallon drum. He was bow-legged and arthritic. That’s exactly what I’m turning into. I’ll be telling the kids next door to “Get off my lawn!” soon).

She’s done an incredible job developing it from the beginning, which was a cutting about the size of an air layering off. The nebari (root spread) is stunning.

I bought it a few years ago and have done some branch editing, but it took until July of this year for me to get drastic (hey, I’ve been traveling). I’m falling behind on everything). I made the decision to remove that one branch. But why waste the branch I’m about to cut down? Let’s add an air layer to it.

I had decided to move the font slightly counterclockwise

And, as you see, I went pretty deep with the cut. You’ll see why in a second.

Let’s see what we have for roots. I hope it’s good, I want to start styling this tree.

Gently, oh so gently, like removing silky undergarments, I pull off the aluminum foil…(I learned early on after I started wearing silky draws that you can’t just rip them off, that’s how you bust the stitching….)

Hmmmmnnnnn…..not what I wanted to see.

There are maybe three visible roots.

One would think that a ficus, which is known for lots of roots, would have made more. But I knew from experience that this species takes a lot longer to put them out on an air layer. The last one I did took half a year: this big guy…

Here’s the air layered I got from it:

Here’s today’s tree. It did put a root out above the cut, amazingly. Maybe next time I’ll just put the sphagnum on without cutting. Hmmm. Science and horticultural knowledge are one thing, but practicing them is an art. And what may work for you, I may never get to work for me.

That root I’m pointing to above comes down to here, below.

But the cut, which was pretty deep, as you see from July…..

Never take setbacks as failures. What I’ve learned here is that maybe the best way to heal a big cut is with sphagnum, at least on Ficus salicaria. That’s a big deal.

From here on, considering I still want an air layer, the best practice (science-wise) is to recut the line and re-apply the sphagnum and foil.

So that’s what I’m going to do.

And I’ll leave it another few months.

And no worries, I’ll keep up with the updates