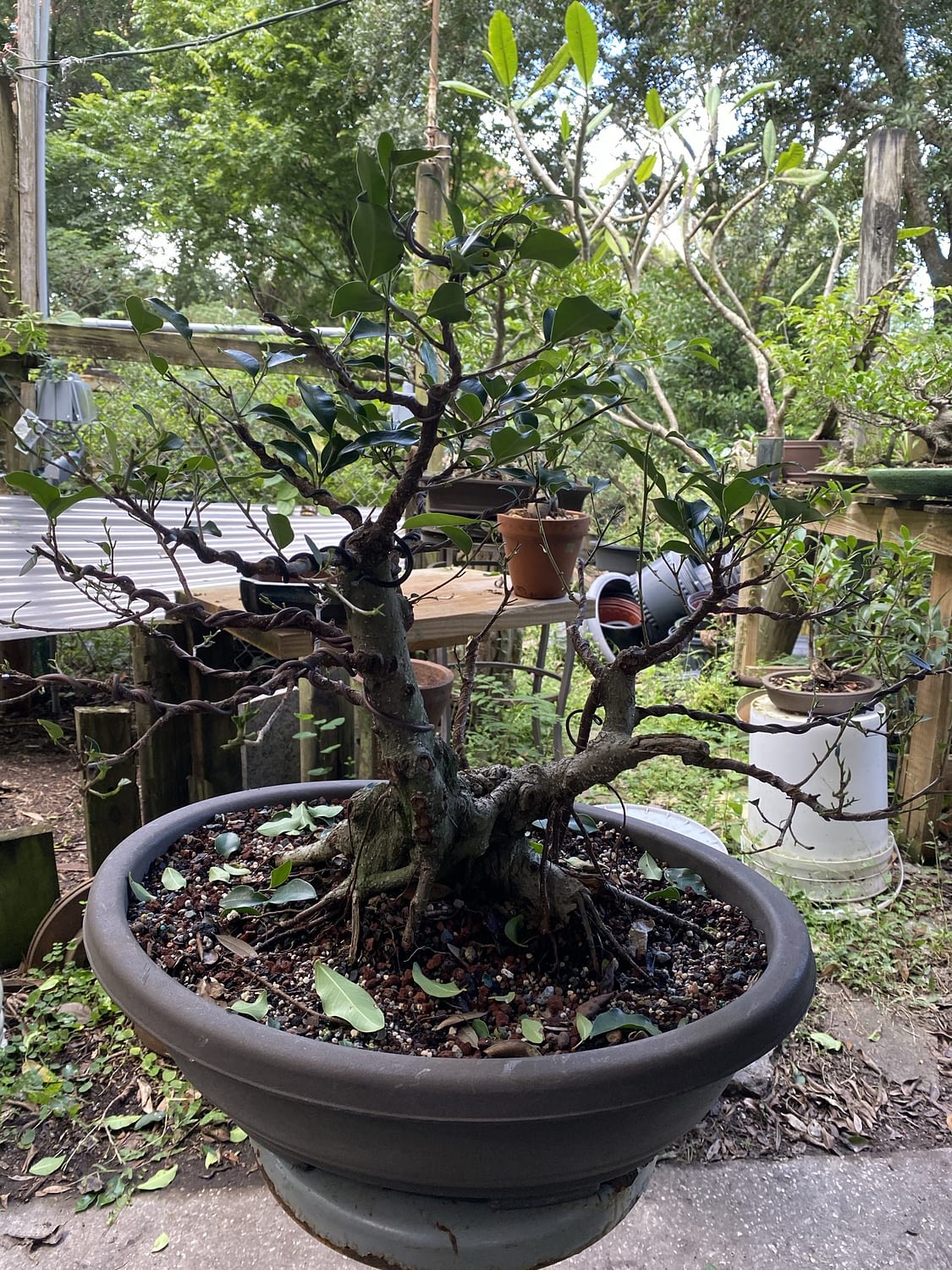 A mere two months later, time to remove wires, re-wire, and cut it back.

Here’s how you saw it last, a Ficus microcarpa from a client’s backyard.

Excellent, you’ve got some good back budding.

The wire is perfectly cutting in.

“If you don’t have wire marks, you’re not using enough wire,” is one of my aphorisms for developing ficus bonsai. That’s because if you don’t leave the wire on long enough, the branch will lose its shape. Particularly on a ficus. Then you’re just wiring for the sake of wiring.

This summer has been particularly wet in Florida, or at least in my backyard. And I believe it’s a fungus.

It’s on a lot of the leaves, which is unusual for F. microcarpa. I’ll use BioAdvanced All-in-One Rose and Flower Care, which contains a systemic fungicide (tebuconazole), a systemic insecticide (imidacloprid) for Cuban laurel thrips, and fertilizer (6-9-6). For a ficus in Florida, it’s ideal for transitioning into fall.

I believe it’s a fungus because not only are the leaves black, but some of the stems are as well, as shown in the photo above.

Of course, it could be phototoxicity from the imidacloprid I used in the previous session releasing too quickly due to all the rain we’ve had. But we’re entering the dry season, so that shouldn’t be an issue going forward (though, as I write this, the forecast is calling for a severe thunderstorm event that’s been sweeping East, across the Gulf States). It was quite severe in Louisiana a day ago).

But the new shoots are healthy and green, so I’m not concerned.

The first step is always defoliation and cleaning up all the old leaves (which I began before the first pics at the top).

Then there’s a little wiring.

And some guy wires (tie-down wires, if you will). I know some guys who are into bondage, so it’s a strange name for them. I’m not sure what you’re talking about).

Let us return to the task at hand!

After defoliation, a good way to get rid of all those fallen leaves is to use your scissors like you’re a yard policing officer.

Simple. That one took me 18 years of picking them up by the fingertips to figure out.

So you don’t have to scroll back up to see the upward movement, here’s the first image again:

As the song begins, “the ficus has no taper, so I gotta cut it back.”

My students complain that they have spent months growing ramifications, only for me to come in and cut it all off.

Have faith in the process. Taper, movement, and proportion, and don’t be concerned. A tree sprouts. That is its function.

Now, a little wire on the new branches, and re-wiring on some of the old ones. (Wire, un-wire, re-wire, and so on indefinitely.)

More importantly, I’m going to secure many of the main branches.

What causes the growth of new branches? Hormones are also the cause of adolescent rebellion. Hormones force them to grow in the direction of the sun (auxin is the main one, and auxin dislikes the sun, so it collects on the underside of the branches, in the shade, and causes those cells to elongate faster than the cells on top, pushing the branch up).

That should suffice until next spring. Except for some un-wiring, re-wiring, and so on,

Now I can relax for the rest of the morning. Maybe

It’s hard to believe that just a few years ago, our subject looked like the little ficus on the right. Many sins are washed away by growing in the ground (or a large pot). That is life, and it is also a truism for growth in general.